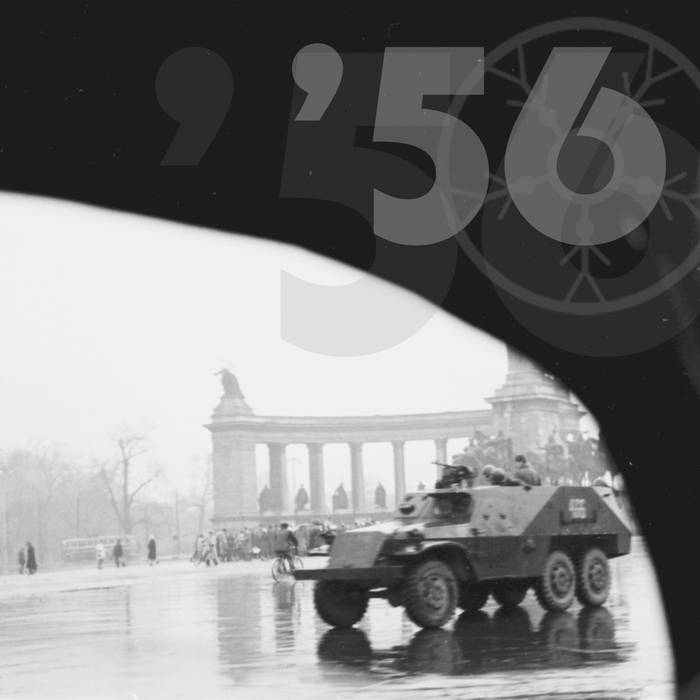 For the 60th anniversary of the Hungarian Revolution. The Hungarian Revolution of 1956 or the Hungarian Uprising of 1956 was a nationwide revolt against the government of the Hungarian People's Republic and its Soviet-imposed policies, lasting from 23 October until 10 November 1956. Though leaderless when it first began, it was the first major threat to Soviet control since the USSR's forces drove out Nazi Germany from its territory at the end of World War II and broke into Central and Eastern Europe. The revolt began as a student demonstration, which attracted thousands as they marched through central Budapest to the Parliament building, calling out on the streets using a van with loudspeakers via Radio Free Europe. A student delegation, entering the radio building to try to broadcast the students' demands, was detained. When the delegation's release was demanded by the demonstrators outside, they were fired upon by the State Security Police (ÁVH) from within the building. One student died and was wrapped in a flag and held above the crowd. This was the start of the revolution. As the news spread, disorder and violence erupted throughout the capital. The revolt spread quickly across Hungary and the government collapsed. Thousands organised into militias, battling the ÁVH and Soviet troops. Pro-Soviet communists and ÁVH members were often executed or imprisoned and former political prisoners were released and armed. Radical impromptu workers' councils wrested municipal control from the ruling Hungarian Working People's Party and demanded political changes. A new government formally disbanded the ÁVH, declared its intention to withdraw from the Warsaw Pact, and pledged to re-establish free elections. By the end of October, fighting had almost stopped and a sense of normality began to return. After announcing a willingness to negotiate a withdrawal of Soviet forces, the Politburo changed its mind and moved to crush the revolution. On 4 November, a large Soviet force invaded Budapest and other regions of the country. The Hungarian resistance continued until 10 November. Over 2,500 Hungarians and 700 Soviet troops were killed in the conflict, and 200,000 Hungarians fled as refugees. Mass arrests and denunciations continued for months thereafter. By January 1957, the new Soviet-installed government had suppressed all public opposition. These Soviet actions, while strengthening control over the Eastern Bloc, alienated many Western Marxists, leading to splits and/or considerable losses of membership for Communist Parties in the West. Public discussion about this revolution was suppressed in Hungary for more than 30 years. Since the thaw of the 1980s, it has been a subject of intense study and debate. At the inauguration of the Third Hungarian Republic in 1989, 23 October was declared a national holiday. Source: Wikipedia